Teaching the blues is all a part of jazz!

A moment after writing the title of this article, up popped an image of John Lee Hooker smiling and shaking his head. “Nobody can teach you the blues. Blues is a feeling, something you have to live.” I tried explaining that I’m a jazz piano teacher and that teaching the blues is part of my job but the image faded.

Can you learn to play the blues?

So where do we start? Can we actually learn to play the blues? If you’ve read my previous articles or are one of my students, the following message will come as no surprise: no matter how many books you read or the amount of teachers you learn from, nothing will replace two activities: playing with other musicians and listening to the jazz and blues masters. So, onwards!

In my last article I bypassed the fruitless attempt to define jazz and will do likewise with the blues, but we can still amuse ourselves by googling it. Here’s the first quote I came up with:

I’d argue that it’s not necessarily melancholic and we’ll discuss the form later in this article. But I now want to address the subject of this article: teaching the blues.

When a potential student asks to be taught to play blues piano I have to admit to a rather grouchy response. “I teach jazz and, for me, blues is a part of jazz and jazz is a part of the blues.” Actually, I’m not convinced that this is strictly true. But for teaching purposes I find it unhelpful to separate them into two distinct compartments. If we have to take a stab at separating them, it could be said that, say, Muddy Waters is in the blues camp. But as soon as we try attaching a ‘jazz only’ label to jazz musicians it becomes nigh impossible to assert that their music has no connection with the blues. There is, perhaps, less of a blues influence in the playing of Bill Evans than, say, Oscar Peterson. It could also be said that some European jazz has evolved through influences other than the blues.

I see my job as preparing students for a variety of blues tunes that they are likely to encounter at a gig. As this is an article rather than a book, I’ll just be focusing on varying blues structures rather than chord choices, scales, licks etc.

A blues sequence can take on a number of guises, varying in time signature, length and chord structure. Here are some examples.

A basic blues contains 12 bars and 3 chords: I, IV and V. These chords are unusual in that they are non-functioning dominant 7s. In other words, rather than pointing to their tonics (1) these dominant 7s stand in their own right.

The next example is a more ‘jazz’ version of this sequence, where, at bars 9 and 10, the V and IV chords are replaced with II – V. This is the sequence for Duke Ellington’s C Jam Blues:

When teaching the blues it’s important to point out that the blues sequence isn’t always in a major key. Here’s the sequence for Coltrane’s Mr P.C.

(At bar 9 the chord Ab7 could be replaced with its tritone substitute D7(b5).)

I should point out that when I describe the above sequences as ‘basic’ I’m referring to the amount of chords rather than suggesting that they are in any way inferior or easier to perform. Take a listen to Coltrane’s version of Mr P.C. as a case in point.

So far my examples have been in 4/4 time but All Blues by Miles Davis is in 6/8. Here’s the piano accompaniment to his melody: 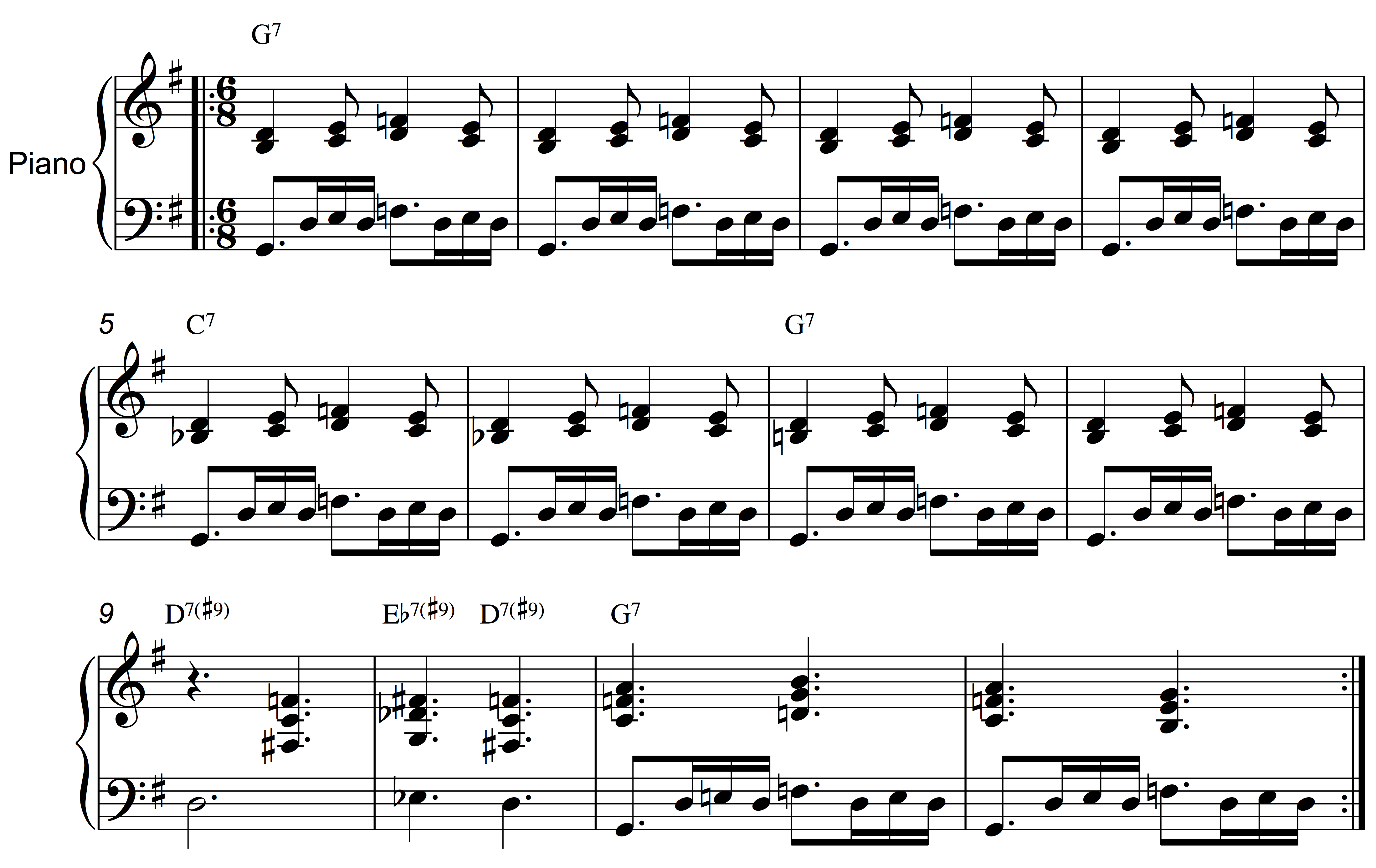 Once again, notice the subtle harmonic twist in bars 9 and 10.

When teaching the blues I always point out that a  blues sequence can be in a variety of time signatures, including 3/4, 5/4 and 12/8.

In C Jam Blues (above) a II – V sequence was introduced in bars 9 and 10. In the 40’s the Bebop players took this to its logical conclusion, giving the sequence a complete makeover. Firstly, chord 1, the dominant 7, was replaced with a straight major chord. This was then followed with a series of descending II – Vs.

Here is one variation of this more complex sequence:

The bebop blues sequence in F.

This sequence works with many bebop blues sequences. One example is Charlie Parker’s Blues For Alice.

All the examples so far have been 12 bar sequences, but this length can vary. Here is an 8-bar blues that would work with Ain’t Nobody’s Business.

The blues sequence can also have a length of 8 bars.

This is by no means an exhaustive list of blues variations but, hopefully, demonstrates that there is more to the blues than 12 bars and 3 chords.

I am also teaching the blues and jazz to my private students in London.

Learn all about my learn jazz piano course here!